I’ve been sick a few days and ended up going to the beach to just sit and relax this past weekend. Wanted to do some lite reading, meditating and taking in some oh natural Vitamin D.

A group of ladies celebrating a 50th birthday arrived shortly after I set up my day camp and one brought her dog. All she wanted to do was play fetch in the water. After she tired of that she came over to me and laid down by my side. Dogs are incredible beings and they just know who needs what when. She was a stranger when she first arrived but a sweet blessing after I departed. Thank you for knowing I needed some extra love that day Ms. Cayenne.

3. The Water-Babies, A Fairy Tale for a Land Baby by Reverend Charles Kingsley, Copyright, 1885

4. Religious Denominations of the World by Vincent L. Milner, Copyright, 1872

5. The Old Man and the Sea by Ernest Hemingway, Copyright, 1952. Correct, two versions same year published. Books are completely different designs and sizes. Both are beautiful.

7. Hunting Big Game in the Wilds of Africa Containing Thrilling Adventures of the Famous Roosevelt Expedition, Copyright not listed. This was a gift as most of them are and the thrilling adventures is what speaks to me here not the actual hunting.

8. The White House Cookbook by Mrs. F. L. Gillette, Copyright 1887. This is by far the favorite in my collection. Cooking is a special time for me and something I truly love to do. The pages in this beauty are stained from cooking centuries ago it makes me wonder who the chef was and who the special guests were and what the conversation might have been about. The paper the book was printed on is so different than what most books are printed on today. The details that begin and end each chapter are just timeless. A dear friend gifted this absolute treasure to me unexpectedly and included one of the most endearing cards that reads, “You are just as graceful and noble as the wives of our presidents…who have graced The White House. Enjoy!” Love, Laura

My First Visit To the Palm Ball

This year’s Palm Ball theme was Mangroves in the Moonlight. It was way more than that!

Seeing as this was my first time attending this event, I had properly prepared to get my hair, makeup and nails done. I love to keep things simple so if it’s done for me and all I have to do is slip into my gown, it makes the evening all the sweeter.

The Conservation Foundation of the Gulf Coast hosts guests at what I think is the most elegant gala of the season, the Palm Ball. My guest and I valeted our vehicle and proceeded into the swelling crowd for a libation. As we settled in, we strolled the grounds, took a walk out onto the dock and to the top of the grandfathered-in boat dock for some amazing sunset views. As the sun set, the main tent opened. As we walked into the entrance of the event, I stopped in absolute awe of the pure beauty of this event.  A plethora of unimaginably gorgeous chandeliers hung from above and the lighting was this really pretty purple. I might have lost my breath and said a special thank you before taking my seat next to my guest.

We sipped on cocktails, strolled under the moonlight and danced the night away after a scrumptious dinner of pan-seared jumbo diver scallops and craw-fish, green peas & butternut squash risotto, crispy artichoke, foie gras, nage & crispy salsify root as our first course. Our entree was thyme & garlic roasted chateau of beef, anise-scented sweet potato puree, heirloom baby carrots, toasted cauliflower, grilled trumpet king mushroom, cabernet & black truffle demi reduction. We didn’t even see the dessert because my guest took me by my hand for some dancing as the band Pocket Change played. It was one of those evenings you didn’t know you would hate to see come to an end. 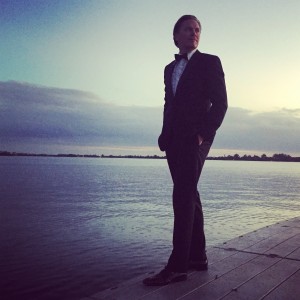 My only regret on this shot is that I didn’t have my camera and had to use my cell phone. The lighting caught my eye and the subject was my inspiration so I asked him if he’d like to join me down on the dock for a few photographs. I love his overall James Bond tone wearing that Hugo Boss tux, ruffled vintage shirt and his artistically painted shoes. We were quite the pair in our Black tie, sequins, satin, paint, and Converse All Stars. His artwork is something to truly see; Tim Raines, artist www.timothyraines.com

Every breath connects us to the world ocean — and to each other. We share a responsibility to conserve and sustain marine resources, habitats and our ocean’s biodiversity. At Mote Marine Laboratory & Aquarium, we empower the youngest inhabitants of our blue planet to embrace that responsibility.

Mote Marine Laboratory & Aquarium just made a huge announcement! In order to continue their mission and carry out their vision, Mote now has plans to build a massive and very impressive new Aquarium around Nathan Benderson Park in Sarasota County! The new Mote Science Education Aquarium will share ocean literacy with a much greater cross-section of residents and visitors. This will more than double the size of the current Mote Aquarium and will make learning about the oceans for all much easier in this 110,000 square feet of space. Interested in helping or just learning more about coral reef, marine life, science, research? www.moteoceansforall.org

I do some driving and every now and then you need some extra help on car repairs and maintenance. Some huge semi truck had a rather large rock roll off its uncovered cargo and it found my windshield to land on and bounce from leaving a rather large crack in my windshield. Safelite AutoGlass repair came to the rescue. As it was being repaired this Monday morning, I was in and out of the office to check on things and had the idea for this particular theme; of out of bounds. 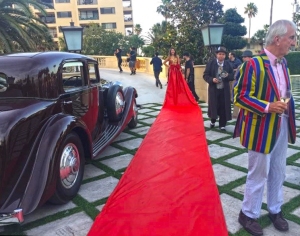 A new MTV Reality Show called Siesta Key premieres July 31st. The scene on the street was nothing short of a gallant Great Gatsby.

Maria Brady of Wedding & Event Design & Coordination and Beth Bronson-Kompothecras of So Staged Event Design + Rentals put on a black-tie fundraiser that was recently held at a gorgeous estate on Siesta Key and was by far the best event I have ever been to. The details astounded and delighted every guest. Women were adorned in bejeweled gowns and roaring twenties headpieces and gloves. Dr. Gary and Beth Kompothecras and their son Alex hosted over 150 guests at their estate home on Siesta Key to help raise funds for autism. Beth and Alex came up with the theme and had some fun planning it all for the lucky few to attend and experience.

As we arrived to the valet, we were greeted with Bellini’s in old fashioned champagne coupes and then asked to take the red carpet which was a true live red carpet. With a female model dressed fully wearing the red carpet! We followed her skirt path past a pristine, very-well cared-for 1933 Rolls Royce Silver Phantom II as old-fashioned paparazzi with the old flashbulb cameras interacted with guests upon arrival. Bellow sounds formed from a jazzy saxophone player playing busker style music. Yes, the tone had been carefully set.

Once we walked up the winding rising entry to the estate, two female models were positioned to each side of the main entry wearing gold lame evening gowns and crystal chandelier headpieces. Both were standing on high risers smiling away as they greeted each guest.

We entered and the entire home had been done in 1920’s décor style. The details simply took our breath away. Everywhere one looked, exquisitely designed décor met your eyes. Beautiful vintage furniture was strategically placed. So Staged has amazing pieces and Maria rents from Beth often. So Staged also built the larger-than-life champagne tower as guests entered their home.

The lavish event provided a menu reminiscent of a 1920s party and included favorites from that era such as ‘Classic’ Deviled eggs, Blinis with Sour Cream & Black Caviar, Baked Oysters Rockefeller, Whole Poached Salmon, and enormous Antipasto and dessert stations.  The catering crew wore bowties, suspenders, and arm garters as they did in the 1920s! As you grazed the decadent array of food, a living female statue painted in metallic gold held a large white globe light and assisted in serving sliced lamb to guests.

Cigarette girls dressed in 1920’s style attire handed out candy cigarettes and chocolate cigars. The pianist played old Ragtime music and later as the champagne flowed, the music changed over to a DJ who continued the ragtime theme then onto everything popular today. The florals were done by staff from So Staged. The arrangements were chosen to go with all white Phalaenopsis orchids as they were very Gatsby like. Cameras were flashing as were the smiles. And as a one last big surprise to push the event way over the top, Maria Brady crafted and coordinated a metallic foil gold confetti drop. It was definitely New Year’s Eve on a Thursday evening on Siesta Key!

AC/DC lead singer Brian Johnson and his wife, Brenda, donated an undisclosed amount of money to create the “Brian Johnson Music Therapy Center” at Sarasota Memorial in the Pediatrics unit. Sounds like incredible music to our ears.

She is a stray but doesn’t act like one. Her name is Stormy but she is extremely calm. Her green eyes are so expressive she mesmerizes me. I see her almost weekly and she has a serious but sweet message in her eyes. Do you see it? 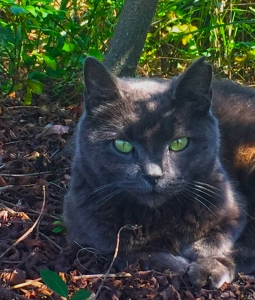 Little Luke (Wittle Wuke!) loves fire trucks and wants to grow up to be a fireman. So on his sixth birthday on November 6th, I made him this miniature fireman pumpkin. Straight from my heart to his home. He is such a fireball and just cracks me up! He is definitely my entertainment at our staff holiday parties as he blazes from room to room making us all laugh!